You are here:
After Effects TemplatesAinTrailers 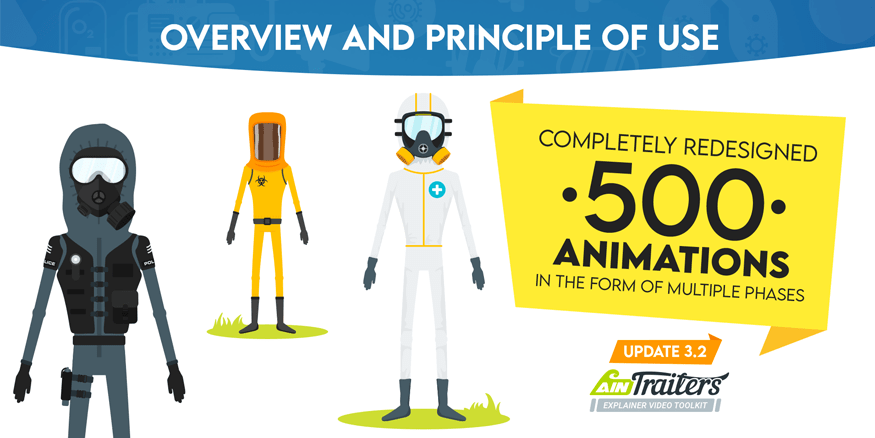 Update 3.2 is one of the most anticipated updates for AinTrailers explainer video toolkit. How can this update be so useful? Primarily due to the changed principle of animations, especially for the combination mode. Combining animations is a unique feature of our plugin that has no analogues in the market among competitors. The whole year it was in experimental mode and thanks to feedback from users, we have compiled a list of the main problems and typical situations due to which difficulties arise.

Based on this, we completely redid all character animations from scratch, taking into account the nuances. First of all, we unified the structure of animations for a more correct combination of animations with different types of animation (IK or FK). But the main change in the principle of creating animations. Now almost all animations, with the exception of special ones, begin and end with a default pose. This means that you can now combine animations seamlessly. You will appreciate the power of these changes.

Understanding the phases of animation presets

Below we will consider the main cases in phases.

If the animation does not have the phase indicated in parentheses in the name or has a phase with the name “(Premade)”, then this means that the animation starts and ends with the default pose.

Some animations are made of two phases like “Start” and “End”. At its core, this is one animation, but initially divided into phases so that it was possible to leave the character in a certain pose from the “Start” phase for the required amount of time and only then make the transition to the default pose using the “End” phase.

By default, the plugin will add an “End” phase 1 frame from the last keyframe of the “Start” phase. If you need a larger gap, then you can do this by manually shifting the keyframes. You can see this example on screen recording here.

As in the previous case, this is technically one animation, but divided into 3 phases. The “Start” phase makes the transition from the default pose to the animation. This gives flexibility, because thanks to the “Loop” phase you can repeat the same action any number of times. And then you can seamlessly transition the animation to the default pose using the “End” phase.

Presets with three phases (“Start”, “Loop”, “End”) must be combined through 1 frame from the last keyframe of each phase. By default, the plugin independently makes the necessary shift, regardless of the position of the time indicator. Therefore, you do not need to do any additional actions, just select a preset and click on the apply button. You can see this example on screen recording here.

The pack has a section with animations where the character is sitting. In this section, the main animations have “Start”, “Loop”, “End” phases that work from a sitting position. As a rule, in scenes, users use a character who is already sitting, but if you need to bring from a standing position to a sitting position, we specially made additional phases (“Down” [Before Start], “Up” [After End]) so that this does not require additional actions from you and is as simple as possible.

Preview of character animations and emotions

Update 3.2 also received over 260 animated emotion presets for premade animations. Emotion names are mostly identical to animation names or are related. For example, one emotion preset can fit two similar animations. You can use both the presets we have prepared, or create your own using a set of 190 emotion presets, or by yourself using the settings.

How to combine animations - Video Tutorial

In the video tutorial below, you can find more relevant material on how to combine animations. This is a short example, so you will quickly understand how combining works. Also, in addition to the video tutorial, we have also prepared additional training material – a guide How to make walking or running character in the scene.

Introducing 100 Special and Medical Animated Characters for After Effects
August 18, 2020

Free Transitions for After Effects and AinTransitions extenstion is now available
December 17, 2019